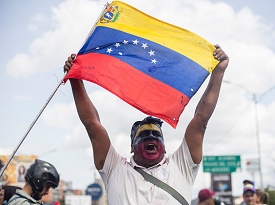 The US Department of the Treasury’s Office of Foreign Assets Control (‘OFAC’) has announced its designation of ‘four entities that operate in the oil sector of the Venezuelan economy pursuant to Executive Order (E.O.) 13850’ – and four vessels ‘that transport oil and other petroleum products from Venezuela to Cuba as blocked property owned or controlled by the four designated entities.’

Treasury Secretary Steven Mnuchin said that the US ‘continues to take strong action against the former illegitimate Maduro regime and the malign foreign actors who support it. Maduro’s Cuban benefactors provide a lifeline to the regime and enable its repressive security and intelligence apparatus…Venezuela’s oil belongs to the Venezuelan people and should not be used as a bargaining tool to prop up dictators and prolong the usurpation of Venezuelan democracy.’

OFAC has also announced the delisting of companies and vessels ‘in recognition of a demonstrated change in behaviour’: they are Serenity Maritime Limited, Lima Shipping Corporation, the vessels Leon Dias and New Hellas, and an aircraft (N133JA).