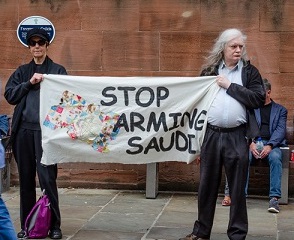 A UK Labour Party leadership candidate, Emily Thornberry has announced that, if she were elected to be UK prime minister, she would undertake ‘permanent reform of the [UK’s] arms export regime’ and would ‘legislate to take those decisions entirely out of the hands of politicians’.

In an article for the political party circular LabourList, Thornberry, the current Shadow Foreign Secretary, said she would assign decisions on arms exports to ‘a panel of independent legal experts who care only about compliance with international law, to be interviewed and appointed not by ministers, but by the cross-party Commons Committees on Arms Export Controls [CAEC], and – like the Bank of England – required to explain publicly their decisions every month.’

According to export controls consultant Richard Tauwhare, there are several significant areas of concern around Thornberry’s proposal, not least of which is its unprecedented nature.

‘I can’t think of any other major arms-exporting country that follows this model,’ Tauwhare told WorldECR. ‘That’s not to say that it couldn’t work, but it’s not clear that it has ever been tried.’

While legislatures in some countries do scrutinise arms export licencing decisions more closely – for example, the US, where Congress plays a substantial role – Tauwhare noted that setting up an independent panel would be ‘an unusual step and would raise serious legal, practical and security issues.’

The CAEC, while regarded as bringing clarity to arms exports through its scrutiny of industry players, government and NGOs, has been criticised by some, including committee members, as doing too little to hold the government to account on contentious issues, such as arms exports to Saudi Arabia. In November, Lloyd Russell-Moyle, a Labour MP and member of the CAEC, said at a Westminster meeting, ‘It’s an open secret within CAEC that it is broken and has been prevented from holding the government to account. CAEC is meant to ensure that the government follows arms export control law, which is clearly being violated by Saudi Arabia on several grounds such as targeting civilians in Yemen and diverting arms to its proxies in the region. It’s not just Saudi though; the government is licensing powerful dual-use mass-surveillance kit to autocrats around the world.’

CAEC ceased to exist on the dissolution of Parliament in November 2019, and committee members have yet to be reappointed.