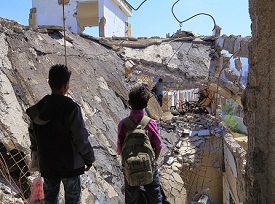 The International Criminal Court in The Hague has been asked to investigate the role of European arms companies and key executives in possible war crimes in Yemen, in a joint action supported by Amnesty International.

The European Centre for Constitutional and Human Rights has submitted a 300-page document accusing European arms executives at firms such as BAE, Airbus and Raytheon of ‘aiding and abetting’ the alleged crimes.

The submission – supported by Campaign Against Arms Trade, Centre Delàs, Mwatana for Human Rights, and Rete Disarmo, as well as Amnesty itself – requests an ICC investigation into potential complicity in 26 specific airstrikes.

The action also calls on the ICC to investigate corporate executives, as well as high-ranking government officials from various arms export licensing authorities, for their potential complicity in possible crimes under international law.

Other companies named in the action include Thales, MBDA, Dassault Aviation, Leonardo S.p.A. and Rheinmetall AG, through its subsidiary RWM Italia S.p.A.

The documentation includes information on 26 airstrikes on residential buildings, schools, hospitals, a museum, and world heritage sites, which, Amnesty says, may amount to war crimes under the Rome Statute of the ICC.

In a statement, it noted that despite considerable evidence of serious international humanitarian law violations during the Yemen conflict, several European countries have continued to export arms to members of the Saudi Arabia/UAE-led coalition.

‘Company executives have had ample time and access to plenty of reliable information to reassess their decisions to supply the Coalition in the light of the horrific events in Yemen. Hiding behind flawed government decision-making is not good enough – now they could face criminal charges before an international criminal court.’