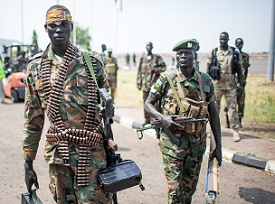 According to the Security Council’s information, Kacou Houadja Léon Adom of the Côte d’Ivoire, Chair of the Working Group on Peacekeeping Operations and the Committee established pursuant to Resolution 2127 (2013) concerning the Central African Republic, said that he was ‘more convinced than ever of the need for the Council and its subsidiary bodies to adopt targeted sanctions that isolate those who jeopardize peace processes, target women and children, commit sexual violence, obstruct humanitarian operations and attack schools, places of worship and even peacekeepers.’

As regards Sudan, she said the situation in Darfur, ‘had improved greatly since sanctions were imposed,’ and that political change ‘presents a real opportunity for a comprehensive and inclusive peace agreement in that country’s western region.’

But, the UN reported, she cautioned that committee chairs often possess ‘limited autonomy and freedom of action because certain Council members openly reject sanctions as a tool,’ and ‘that political divisions within the Council have made agreement on even quite minor actions difficult in many cases since the Committee reaches all its decisions by consensus.’